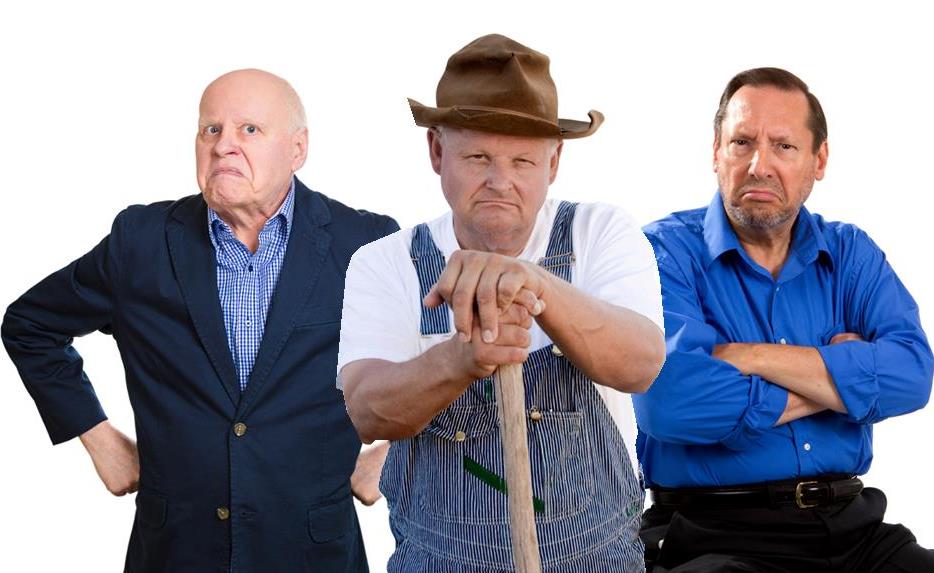 Do you remember watching any of those TV programs featuring “grumpy old men” (GOM)?

I do. I love them! Witty, acerbic and opinionated older males making observations about people and life from a particularly jaded and critical point of view is pure gold for comedy. One of the reasons I really enjoyed watching these shows was that I often agreed with the things that they were saying. Could, in fact, identify myself with the views and experiences of these men – because I am older and I can be quite grumpy.

But, when you start to think about the feelings that are being expressed by GOM it’s sobering to notice that they are most often expressing a deep disappointment and cynicism about their own lives and values. Grumpiness is something that older men feel when they are coming to the end of their working lives and they start to realise that their life hasn’t been what they had hoped. So, the enthusiasms of youth, the values of hope, and the expectations of success appear as old and tiresome ways of being that are increasingly out of reach.

More often than not, depression is understood to involve sadness, low mood, withdrawal, and loss of motivation and interest in things. It is true to say that men and women of any age will experience pretty much the same symptoms of depression. But, men frequently experience a different group of feelings and use a different set of coping strategies that may not commonly be associated with being depressed.

Men who are depressed may feel emotionally down, and experience difficulty sleeping, physical exhaustion, and loss of interest in previously pleasurable activities. But there are other behaviours that men engage in which are less often recognised as indicators of depression. These include:

Some of these signs are indicators of the unhelpful ways in which a man might be trying cope with feelings of hopelessness, sadness, grief, or worthlessness. However, irritability and short-temper are commonly symptoms of depression itself.

Another common issue for men with depression, particularly older men, is that they do not experience “emotional” symptoms. Rather, they feel their emotional state at a physical level. So, they have increasing difficulty with pain or coping with pain. They may focus more on trouble with indigestion, stomach ache, chest pain, erectile dysfunction and a variety of aches and pains which have no particular cause.

Men have to cope with several kinds of stress as they age. If they have been the main worker in their families, and have identified strongly with their jobs, retirement or job loss can lead to high levels of stress involving the loss of an important role, reductions in self-esteem, and a loss of purpose and worth. These can lead to depression.

Similarly, the loss of friends and family and the onset of other health problems can trigger depression. Older people generally feel satisfied with their lives and it is not normal for them to feel depressed. So, older men who are experiencing a loss of interest in life, grumpiness and irritability, frustration and cynicism with politics and politicians, and are irritated by youthful enthusiasm and values, may be suffering from depression.

But, it is not that easy to make that call. It is frequently hard to diagnose depression in older men as they are reluctant to discuss feelings of sadness, grief, and loss. Being a GOM is often seen as usual as it is a cultural norm that men are more often grumpy and irritable as they get older. The irritability and cynicism may mask deeper feelings of disappointment and grief. This creates a very effective defense as it is hard to break down the barrier in superficial or brief conversation.

The Risk of Suicide

Very often older men who later commit suicide had been seen recently by their GP. This is because it can be a complicated picture to identify depression in older men. Many men simply don’t recognise that they are depressed. They may think that depression means being “sad” and they are not feeling that. They just have a lot of headaches, or are tired all the time, or things just get on their wick. Men will also downplay symptoms of any illness and so won’t identify or acknowledge the more serious indicators of depression.

Men in particular are more reluctant to acknowledge or discuss the feelings associated with depression – sadness, fear, and grief. They are also more likely to resist seeing psychologists and the like, because the stigma that is still associated with having a psychological issue leads to them thinking that they will lose the respect of their partners, family and mates.

What Can Be Done?

Frequently among men, especially older men, there is a persistent myth that there is nothing that can be done. So, why bother?

The most effective form of treatment for depression is a combination of anti-depressant medications and psychological therapy. But, there are many things that you can do yourself, as an older man, to cope with or ward off depression, such as: