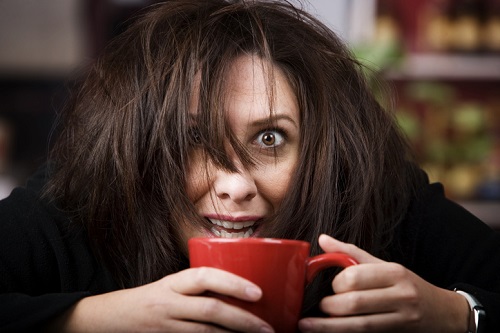 Caffeine is one of the world’s most widely used legal and unregulated psychoactive substances. The effects of caffeine can be seen as fast as 15 minutes after consumption, and can take hours before it is eliminated from our body. Many people consume it for added alertness and sociability, however in large doses, it can result in nervousness, anxiety, and even seizures. Caffeine can be consumed from a number of sources – Besides coffee and tea, it can be found in over-the-counter medications, sleeping pills, weight loss tablets, and energy drinks. Some examples of the average amounts of caffeine in certain products are shown below:

The habitual consumption of caffeinated soft drinks with our meals is very common. As such, many of us underestimate the amount of caffeine that we consume – The truth is, it may be more than we think. With increasing age, individuals are more likely to demonstrate increasingly intense reactions to caffeine, with greater complaints of sleep disturbance and feelings of hyperarousal.

Can you overdose on caffeine?

Yes, caffeine is like other drugs and can have quite serious side effects. Although intoxication does not usually last longer than a day, very high doses can require immediate attention. According to the Diagnostic and Statistical Manual of Mental Disorders (DSM-5), a diagnosis of caffeine intoxication requires an individual to consume doses of caffeine in excess of 250mg and display five or more of the following symptoms during, or shortly after use:

These symptoms must also cause distress or impairment in important areas of functioning, and not be associated with other substances, mental disorder, or medical condition.

Can Caffeine cause a mental health disorder?

Excessive use of caffeine can tip some people over the edge, especially if they are predisposed to disorders like anxiety. Some anxiety disorders such as panic disorder, or generalised anxiety disorder can cause a clinical picture that is similar to caffeine intoxication. This includes feelings of restlessness, sleep disturbances, trembling or shaking, and muscle tension.

Is there help available?

If you regularly consume high amounts of caffeine and currently suffering from anxiety symptoms, you may benefit from seeking advice. Just like many behaviours, changing your coffee habits is possible but it is important to gain support from a health professional. Going “cold turkey” and stopping large amount of coffee can cause serious side effects like migraines.  The best way is to quantify the problem, sit down with a health professional like your GP or psychologist and work out a plan. In a similar way to an exercise plan, you will benefit from not doing this too quickly.

Some interesting articles include: