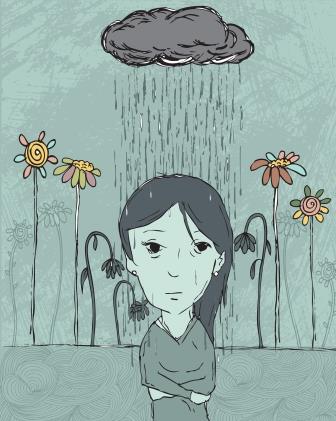 There are several other diseases or conditions which mimic depression; a differential diagnosis by a qualified professional is required to distinguish between the symptoms of a depressive disorder and other possible diagnoses.

Adjustment disorder is a depression with a clearly identified precipitating event.

In bipolar disorder, major depression is accompanied by or interspersed with one or more manic, hypomanic, or mixed episodes.

Depressive symptoms fall short of diagnostic criteria for major depressive disorder due to concurrent substance use, medication side effects, or somatic medical illness, or for other specifiable or unspecifiable reasons.

Depressive symptoms may be transiently present in normal grief. Symptoms more consistent with depression include inappropriate guilt regarding actions surrounding death of the loved one, persistent thoughts of death (survivor’s feelings that s/he would be better off dead or should have died with the deceased person are considered a normal part of grief), morbid preoccupation with worthlessness, marked psychomotor retardation, prolonged and marked functional impairment, and hallucinations. Transiently hearing the voice of, or seeing the deceased person, is considered within normal limits of bereavement.

Patients often may complain of insomnia, nightmares, poor memory, and nervousness which turn out to be directly related to alcohol abuse, rather than indicative of a depressive disorder.

Accurate diagnosis by a mental health professional – such as a clinical psychologist – is essential for effective treatment of depression and similar disorders.

David is a Clinical Psychologist, with a keen interest in couples counselling. He strives to provide a safe environment for his clients to explore their issues and, with assistance, develop new techniques which will help them change their unproductive behaviours. The aim is to have a happier life that assists people reach their relationship, personal and life goals.