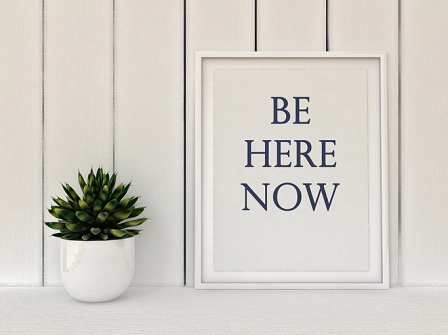 Mindfulness is an ancient technique with modern benefits.

It is perhaps best described as “paying attention in a particular way: on purpose, in the present moment, and non-judgmentally.” (Kabat-Zinn, 1994, p. 4).

It leads to a state of being where you are present, aware and able to let thoughts and feelings come and go as needed. Like being able to take a physical step back in a situation, mindfulness develops the practice of being able to get perspective on your thoughts.

The Origins of Mindfulness

Mindfulness is mostly known for its Hindu and Buddhist (believed to be an offshoot of Hinduism) origins, over 2500 years ago.

We often hear about mindfulness as a way to be ‘present’ in life but the religious origins gave more meaning to meditation than simply being present: mindfulness emphasised living a wholesome life and having loving-kindness to all sentient beings (Kuan, 2007).

This overarching view of living mindfully, to live kindly, can still be found at the core of the religions. While mostly known from Hinduism and Buddhism, the practise itself can be found across the world in various forms.

A well-known example in Christianity would be Brother Lawrence who emphasised being aware of the ‘Holy Spirit’ in “Practising the Presence of God”  (Lawrence, 2004), though the practise is a lot older than the book.

Overall, mindfulness is an ancient practise which emphasises awareness of different concepts, depending on the intention for being mindful.

The Spread of Mindfulness Meditation

Despite its ancient roots, many individuals in the west have only gained awareness of mindfulness recently, as a result of Kabat-Zinn who was perhaps the first to bring the concept out of the religious context. He highlighted mindfulness as a practice for positive mental health with his work, ‘Mindfulness-based Stress Reduction Program’ in the 1970’s (Schlieter, 2017).

Around the same time that Kabat-Zinn was bringing mindfulness in from the east, Langer independently began forming a concept of mindfulness from her research in social psychology and mindlessness (“Origins and Theory,” 2014).

During the 1980’s, research into how mindfulness works and its applications grew, making it more available to researchers and practitioners. One of the biggest breakthroughs, therapy-wise, was the creation of Acceptance and Commitment Therapy (ACT) by Hayes in the 1980s, as it was designed around the concept of mindfulness (Hayes, Pistorello, & Levin, 2012; Zettle, 2011).

Many other therapies have also been modified to include mindfulness in their approaches (Gehart, 2012; Hofmann & Asmundson, 2008).

As mindfulness became more common therapy-wise, it was also growing as a personal practise for many individuals.

Yoga is another ancient Eastern practise which includes mindfulness, and has gained considerable popularity in the last 30-40 years. It is now offered in many fitness organisations and private studios in western countries including Australia.

As this practise has grown in the Western world, the religious aspect has often been reduced, and is now often used without the explicit religious component. This shift has made yoga more accessible in society.

Tai Chi is another Eastern practise involving mindfulness which is gaining popularity in western society. While not as popular as Yoga, Tai Chi offers individuals who struggle to ‘stay still’, another way of practising mindfulness.

There has been an upsurge in mindfulness options as well as ways to practise yoga at home, with the development of better, more accessible technology, and the creation of apps and websites such as YouTube.

Often the idea behind these options is to help the individual develop mindfulness, however it is worth doing some research as many are not effective unless designed for therapeutic purposes (Mani, Kavanagh, Hides, & Stoyanov, 2015; Spijkerman, Pots, & Bohlmeijer, 2016). This is not to say none are effective. In 2012 the app “Headspace: Meditation & Mindfulness” was released which has continued to be one of the most effective apps for mindfulness in the Australian market (Mani et al., 2015).

Mindfulness in an ancient practice gaining popularity in the modern world, during a time when many individuals struggle to be in the moment, with increased availability of classes and technological improvements, apps and videos.

As part of this change, the religious aspect has decreased and there has been a greater emphasis on the mental health benefits.