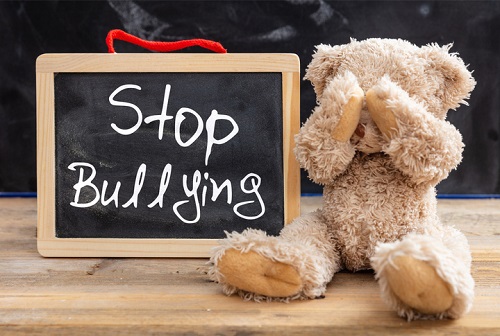 Unfortunately bullying is something that has occurred throughout time, but today there is a growing movement to say NO to bullying.

Bullying is an intentional act of causing harm and unhappiness to other people via harassment, physical assaults, cyberbullying and other subtle methods of manipulation and coercion. Harassment can be via physical, verbal and / or emotional means (Sullivan, 2010).

Its a pattern of behaviour of a person who has difficulty controlling anger, resentment and/or aggression – lacking social skills they choose to place their aggression, social dominance and power upon another. Some of the tactics that bullies use involve: criticism, exclusion, ridicule, teasing etc.

Despite teachers’ best efforts, there is minimal or nil adult supervision in the school environment which expands the bully’s opportunities (Green, Collingwood & Ross, 2010). The bullying may be the actions of one or a group of students excluding, isolating and taking advantage of another. It’s much more difficult to defend yourself and more intimidating when outnumbered.

Who could be considered a Bully?

In relation to children, the child bully would be seen to enjoy pushing others around, choosing to engage in this behaviour regularly. They will have a negative sense of self therefore become aggressive with others, from the very first indication that they are not in control and have little power over a situation. Generally children who are bullies may have learning difficulties and / or have difficult home environments (Sullivan, 2010).

A young person bullying others is generally asserting a high level of social dominance, control, power and influencing others, the aim being for victims to perceive they are powerless and weak.

What is bullying behaviour to be on the lookout for?

Indirect bullying: includes socially isolating a person until they submit. This may involve the bullies spreading rumours, excluding from the group/activity, bullying other students to not socialise, criticising personal appearance/capabilities, name calling, ignoring the person’s existence, staring, laughing at and telling jokes about the person (Eslea, 2010).

To break it down even further, the following can be considered bullying behaviours:

Why Do Kids Bully others?

Children can become bullies for reasons such as:

The Impacts of Being Bullied

Those who experience being bullied also experience suffering, which interferes with social and emotional development. The suffering of some can be so extreme that they have attempted suicide rather than to continue enduring the harassment.

Social dominance and submission is what bullying is about, and this can be life altering because we are shaping who we are and our understanding of the world around us during our early years and adolescent experiences (Arseneault, Bowes & Shakoor, 2010). These bullying experiences affect the person’s emotional, psychological, social and physical growth and can be a very  traumatic experience as they do not feel safe.

A young person is being taught that they are different from their peers, that different is a ‘bad’ thing and this can begin a negative self-talk that they are not good enough, have a dysfunctional sense of self, low self-esteem and low self -orth.

Those who have experienced bullying may become withdrawn, adopting a passive communication style and avoiding conflict as much as possible. They are not able to put up or enforce personal boundaries to keep them healthy and safe, they struggle to stand up for themselves, and do not put their ideas, thoughts or feelings forward as they fear conflict or rejection.

Those who have been bullied may experience anxiety (physical symptoms consisting of nausea, vomiting, body pain, upset stomach headaches etc).

Young people’s level of self esteem, resilience, confidence, coping skill and understanding will impact how they react to bullying.

What Kids can do to avoid be a victim of Bullying:

Parents generally know their younger children better than they know themselves, they are aware of temperament and behaviour patterns therefore will notice when there is a change of mood/attitude/behaviour.

Parents are not able to attend school with the child or ‘bubble wrap’ the child to protect them from bullying or other life adversities. However by being responsive to their child’s needs, having open communication, and involvement in their child’s education, hobbies, interests etc encourages the child to develop into a friendly, kind human. If bullying does happen, it is generally best to be addressed by parents, the school and counsellors.

Parents can help by:

Aleah Haffenden is an Accredited Mental Health Social Worker, working primarily with young people (aged 15 and up). She takes a client-focused approach, using a mix of Cognitive Behaviour Therapy (CBT) and Acceptance and Commitment Therapy (ACT), tailored to their specific needs.