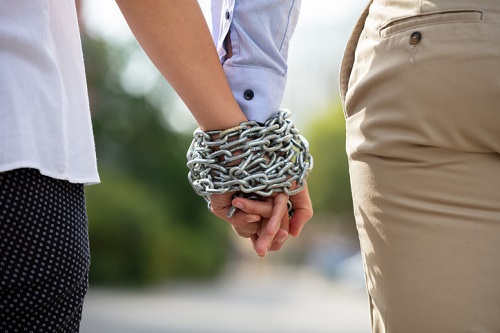 The first step towards breaking codependent habits is being able to recognise the signs that you may be in a codependent relationship.

Codependency refers to a psychological construct involving an unhealthy relationship that people might share with those closest to them.

It was originally thought to involve families of substance abuse, but has since grown to include other types of dysfunctional relationships. The term ‘codependency’ is often used casually to describe relationships where a person is needy, or dependent upon, another person. However there is much more to this term than a partner being inseparable, clingy or needy.

The person who is codependent will plan their entire life around pleasing their partner. The partner (also referred to as the enabler) often needs to be needed.

The enabler’s role is also dysfunctional. A person who relies upon a codependent does not learn how to have an equal, two-sided relationship and often comes to rely upon another person’s sacrifices and neediness.

This circular interpersonal pattern is the basis of what experts refer to when they describe the “cycle” of codependency.

Signs that you might be in a Codependent Relationship

Codependent personalities usually follow a pattern of behaviours that are consistent and problematic. These patterns directly interfere with the codependent’s emotional health and ability to find fulfillment in a relationship.

Some signs of codependency include:

How did I become Codependent?

Once people recognise that they have codependent traits, they often begin to wonder where these tendencies came from.

While the answers aren’t the same for everyone, for most people it begins in childhood. Young children are extremely impressionable, and don’t have the cognitive abilities or life experiences to realise that the relationships they are seeing and experiencing aren’t healthy; that their parents aren’t always right; that parents lie and manipulate and lack the skills to provide a secure attachment.

In reaction to the emotional neglect, the codependent concludes that their own needs, feelings and problems do not matter, and learn to ignore them.

If they have any needs, they learn to suppress them. In some circumstances these children even fear that if they express their feelings or needs, they might be punished for it. They might conclude that having feelings and needs contributes to their parents’ discontent, suffering and disengagement. As a result, such children learn to suppress their own feelings and needs and ultimately, by the time they grow up, they completely disconnect from them.

In these types of families, the child may be taught to focus on the parent’s needs and to never think of themselves. Needy parents may teach their children that children are selfish or greedy if they want anything for themselves. As a result, the child learns to ignore their own needs and thinks only of what they can do for others at all times. These situations cause gaps in the child’s emotional development, leading them to seek out codependent relationships later.

Codependency may also result from caring for a person who is chronically ill or disabled. Being in the role of caregiver, especially at a young age, may result in the young person neglecting their own needs and developing a habit of only helping others. A person’s self-worth may form around being needed by another person and receiving nothing in return.

Children that grow up in abusive families might learn to repress their feelings as a defense mechanism against the pain of abuse. As an adult, this learned behaviour results in caring only about another’s feelings and not acknowledging their own needs. Sometimes a person who is abused will seek out abusive relationships later because they are only familiar with this type of relationship. This often manifests in codependent relationships.

Many feel that they will lose who they are if they are not codependent. However, that’s not usually the case.

In reality, we become more ourselves when we are less of what others expect from us. Breaking codependent habits is a huge gift we can give to ourselves — the victory of growing away from it will balance out our responsibility to ourselves and to others.

The key to repairing and ending codependency is to start protecting and nurturing yourself. That might sound like a selfish act, but it will return you to a place of balance. Others will come to understand that you now respect and are protecting yourself from over-commitment or abuse; and if they don’t understand, they may not be someone who is open to growth in their own relationships.

A person can learn to become less codependent and regain a sense of self and independence in their own lives, however it usually takes working with a therapist to effectively do this, since the behaviours of codependency were learned over many years and are deeply ingrained. It takes both time and practice to apply healthy behaviours.

Individual or group therapy may be beneficial, since it encourages the person to explore their feelings and behaviours as an individual outside of the relationship.

Codependents who were abused will need to recognise past abuse and start to feel their own needs and emotions again.

Breaking codependent habits in your relationship will also mean that the enabler needs to realise that they are not helping their partner by allowing them to make extreme sacrifices.

Through communication training, assertiveness and creating healthy boundaries, both the codependent and enabler can learn how to break these habits and create positive change in their relationship.